We are back from a long (and FUN) camping weekend.  We spent last week getting geared up for it – MiMi and Grampy stocked up the camper while Avery and I made some goodies to pack. 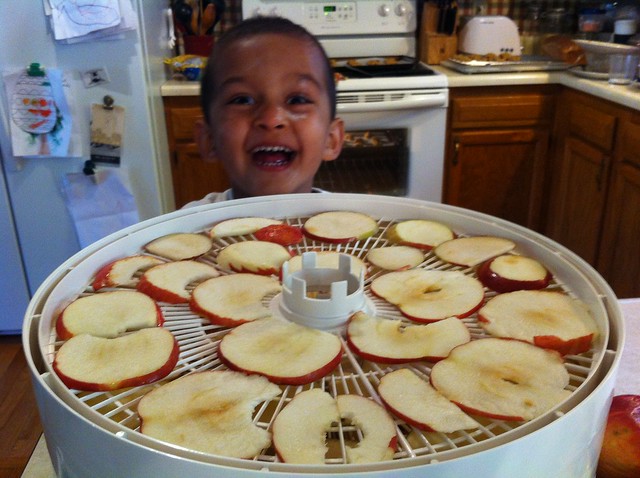 Avery was a big helper making apple chips.  Yes, he took a bite out of almost every one before putting them on the tray. 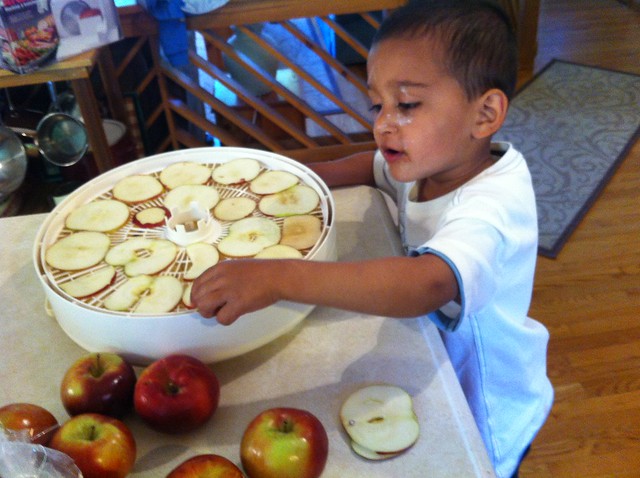 That batch of apple chips barely lasted Friday afternoon – Avery devoured them as soon as we got to camp and shared them with his friends.  I’ll make two batches next trip. And if you noticed Avery’s face in the last picture… 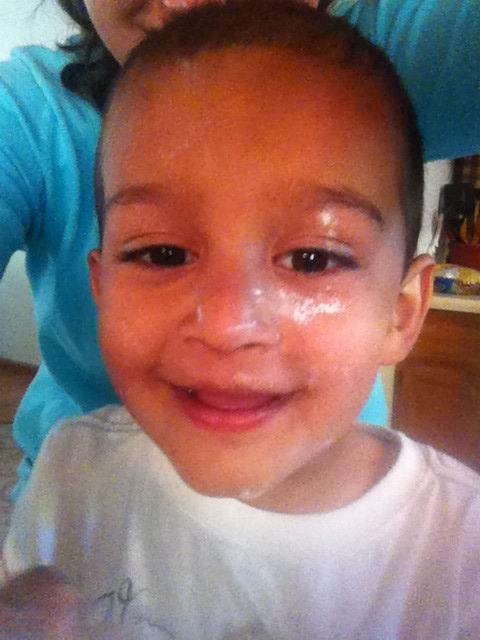 He also helped me make cookies and since stirring is hard work, some flour escaped the bowl. 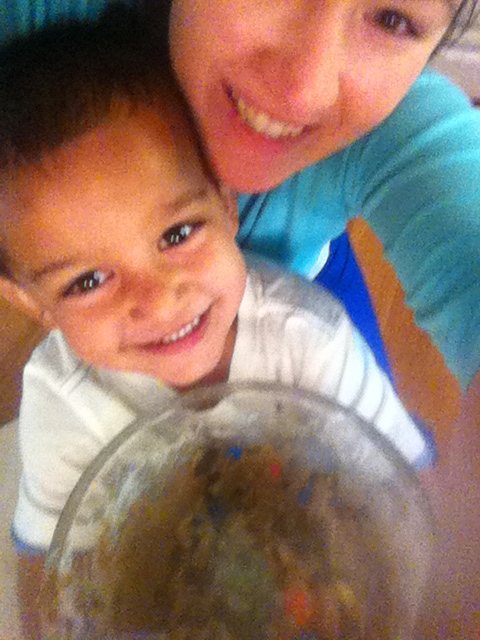 Friday morning came and Avery was so excited…. that he just kept sleeping and sleeping. 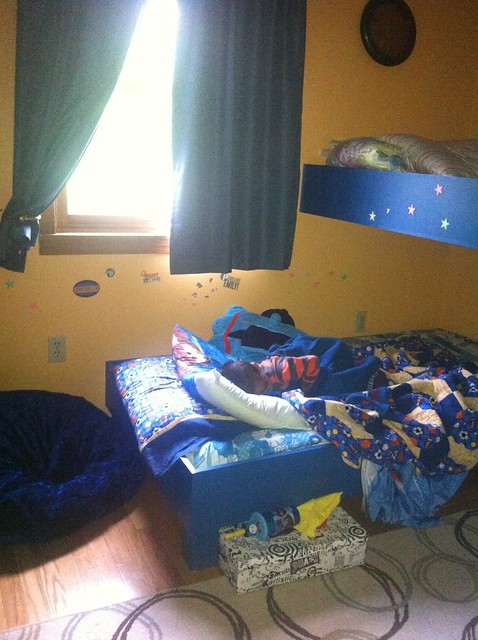 I even tried my ‘mommy tactics on him – opened the window, turned on the lights… but he was still snoozing.  I guess he knew he had a big camping weekend ahead of him and he needed to stock up on sleep!  Friday at noon, we were off!  Grampy and I (Mimi had to work all day and joined us later Friday night) picked Avery up at daycare (which Avery thought was pretty cool since we had the camper with us!). 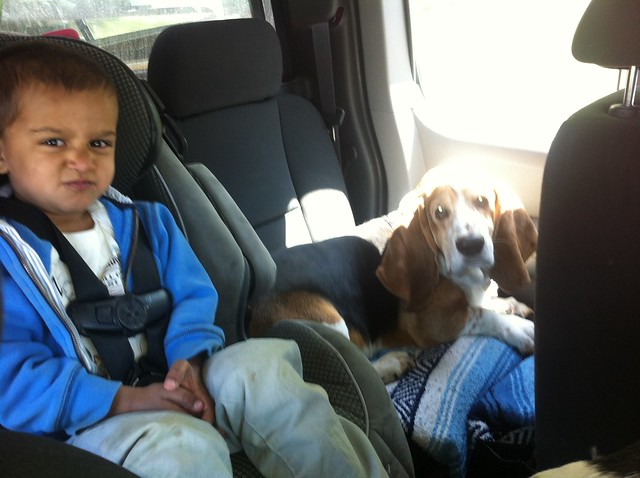 (Oh, Avery looks like a grump in this picture because he’s making a “Pokey Face”)

Just over an hour later, we pulled into the campground – and we were the first ones there! (first ones in our group – we had 6 sites reserved for my Papa’s side of the family – my Mom’s Dad).  After setting up the camper, we headed off to the railroad track. 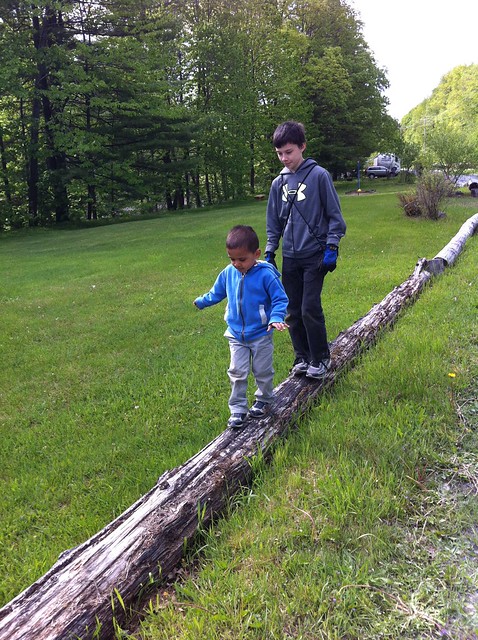 We stayed at River’s Bend, in New Haven VT.  It’s very secluded along a river, but there is a train track and bridge near the entrance. 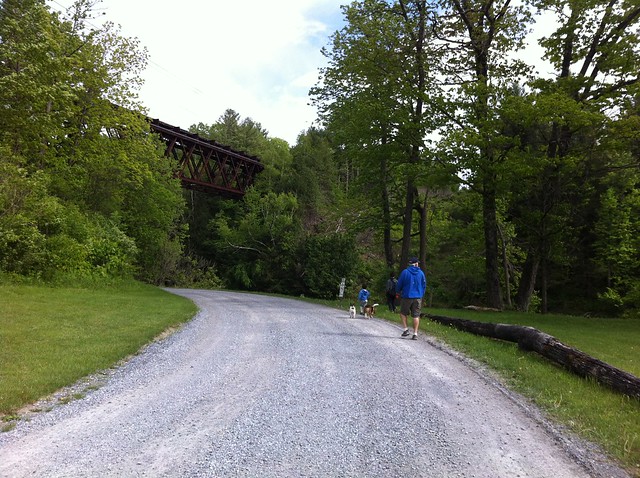 We climbed up the hill and I snagged a couple good pictures of these two. 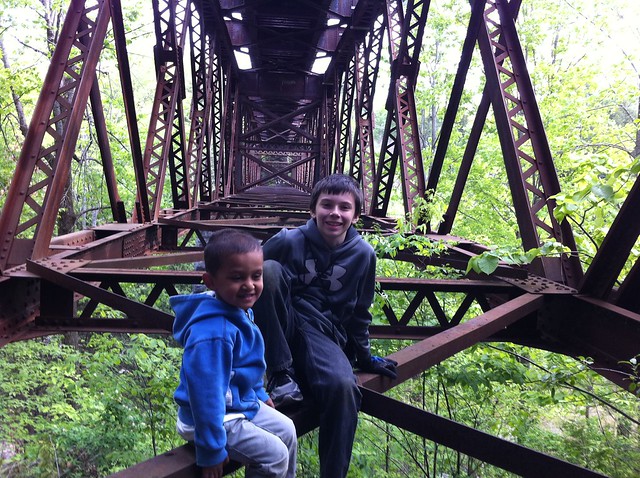 I wouldn’t dare walk over the bridge part – eek too high.  But Grampy and Joseph did. 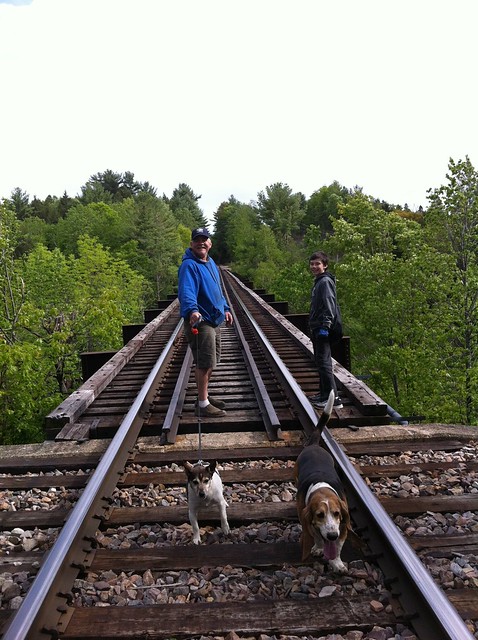 Avery and I stayed on the tracks and I almost got a very poetic picture of Avery on the tracks, then the dogs photobombed it. 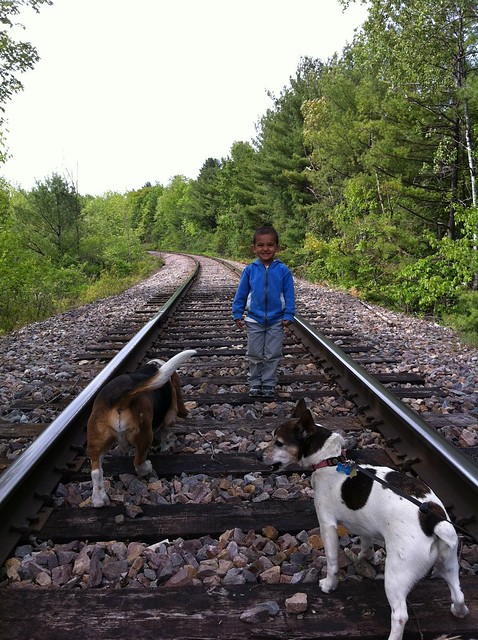 We put down pennies and dimes for the train to flatten.  We went back on Saturday and we found them all – smushed.  Avery and Joseph (my cousin) thought it was pretty cool! 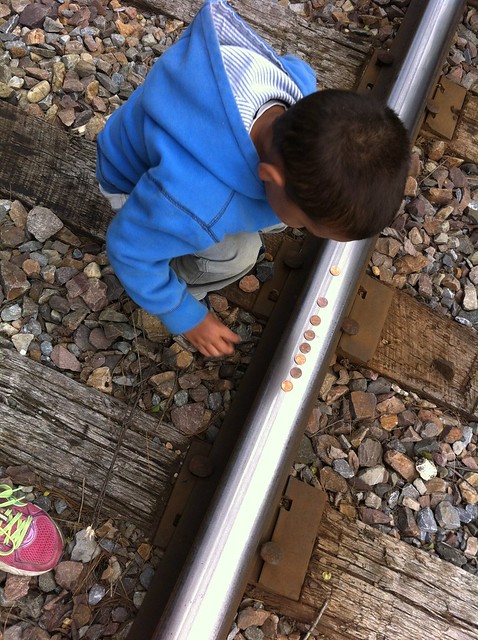 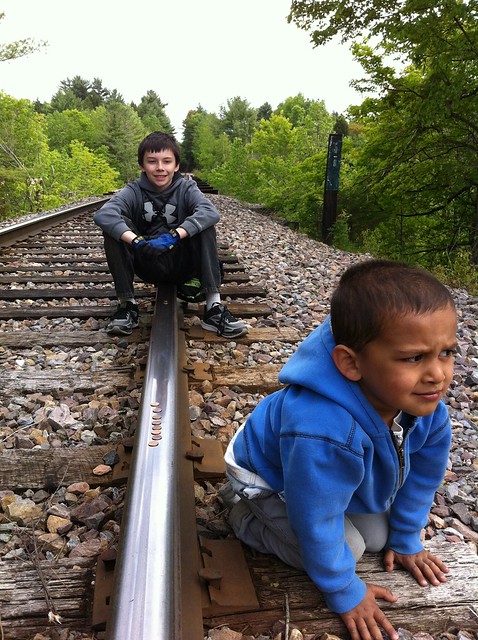 To bring our first day camping to a close, we did popcorn over the fire… 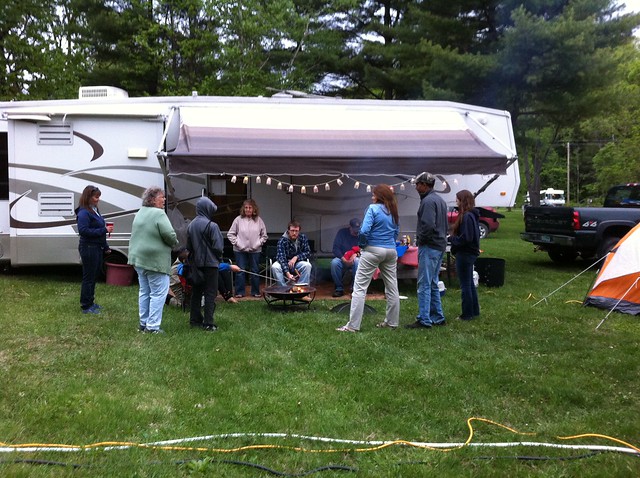 Good thing we brought two bags of it because the first one exploded, haha.  Avery and Grampy enjoyed their usual nighttime snack. 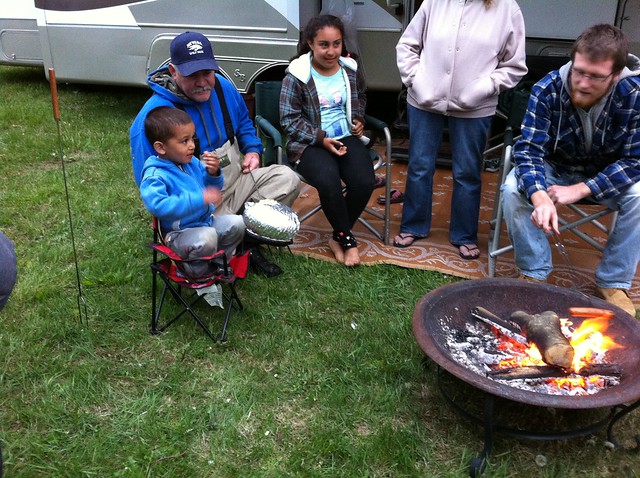 The rest of the weekend was a blur of fun… lots of fishing, playing in the sand, kayaking, playing with family – cornhole and woffleball and some new game called KamnJam.  Avery skipped rocks in the water and rode his bike around with Joseph.  They played soccer and with this helicopter spinner Avery would let off and Joseph or Mia would catch. 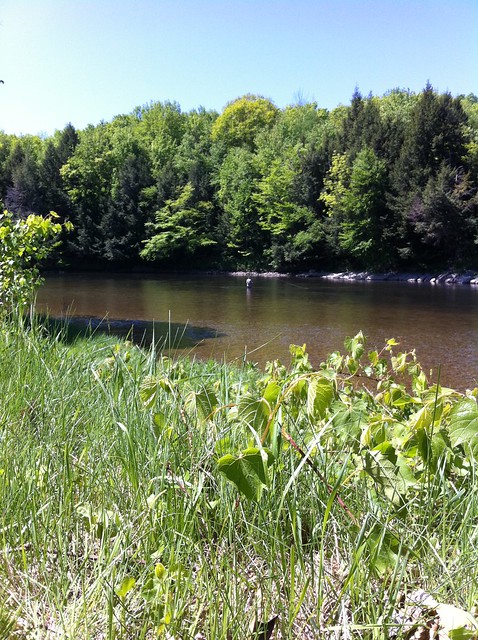 Grampy finally caught a couple fish.  Avery had so much fun playing with his second cousins – ‘my friends’ as he calls them.  He woke up Sunday morning and asked ‘where are my friends?’ since they only came for the day on Saturday and had left that night.  He really loves playing with them. 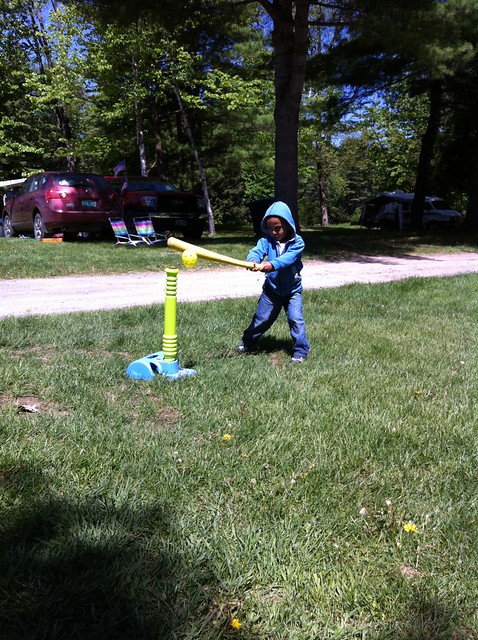 Avery, Grampy, and I spent hours looking for fish.  I took this picture a split second before Avery fell in right there.  It was too funny.  He had a soaked pantleg (just one) and a shoe. We were all laughing.  The water wasn’t deep so he didn’t get far and his pants dried before we got back to camp. 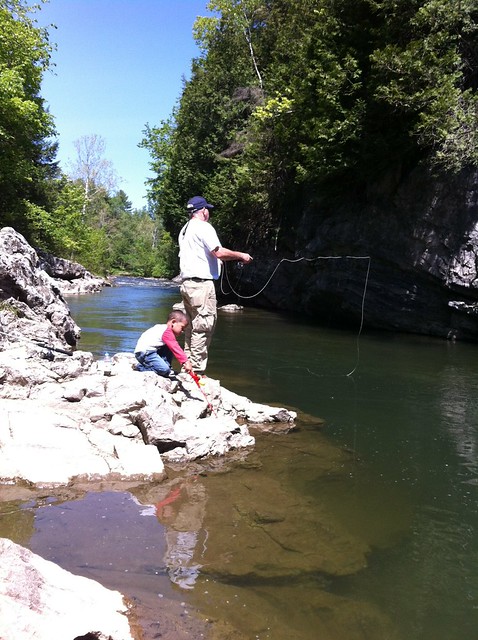 The river was so low in places that we walked out to islands like this a couple times.  We found broken pottery, dug holes making rivers and floating sticks and leaves down – so much fun. 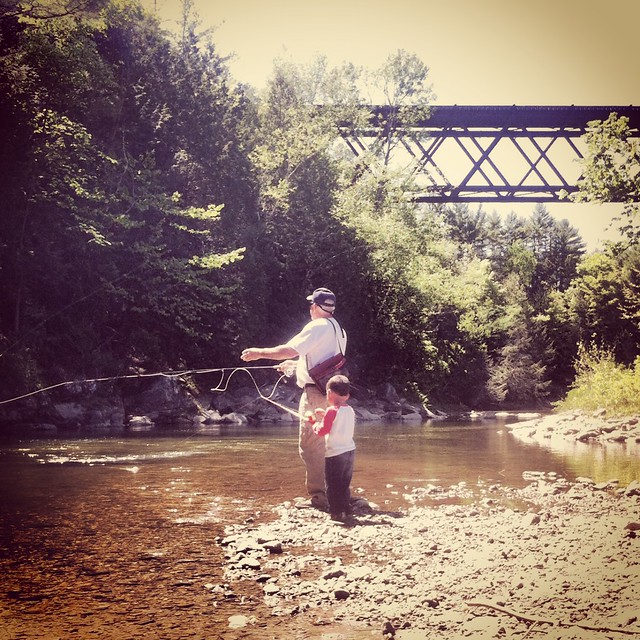 And Avery and I went out in the kayak 4 times I think… one time we even took Frasier along! 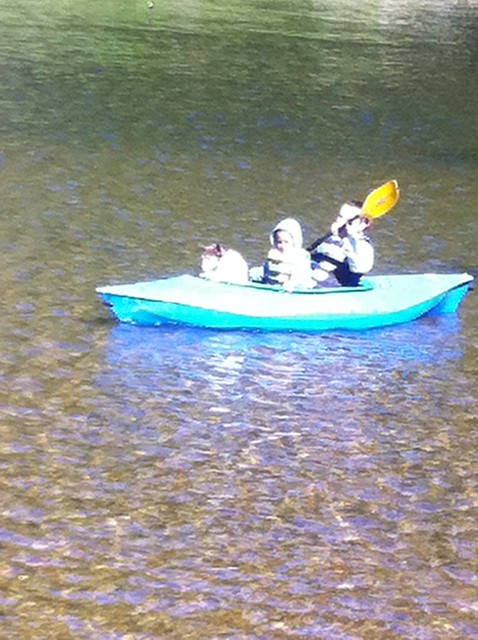 I didn’t carry my phone around with me, so there aren’t pictures of every second of the weekend, but that’s what camping is all about – leaving work, and housework, and electronics at home and enjoying the outdoors and the people you’re with – and we sure did that.

We closed the weekend with smores… oh and catching a frog – the second one of the weekend. 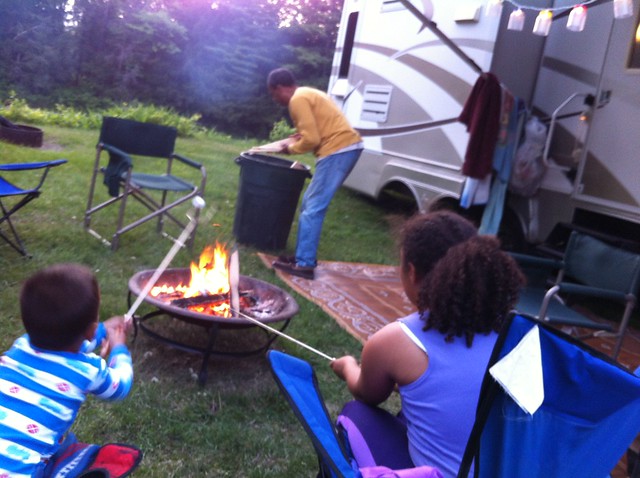 Thank you Johnson Family for such a fun camping weekend.  Sunday afternoon while I was baking up a storm for the week and Avery was playing play doh, he says ‘I want to go camping’.  I think he had fun 🙂

We're a Mommy & Son duo, documenting life in our home...